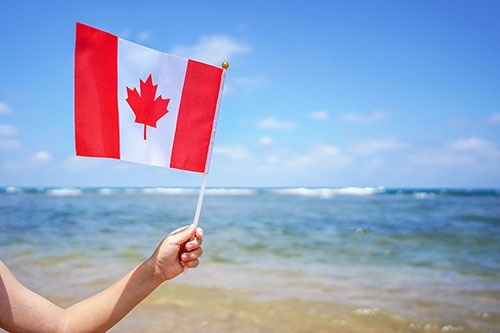 It’s easy to assume winning a sweepstakes or lottery would be the same in every country. However, our northern neighbor Canada disproves that assumption. With the requirement of a skill test question, they set themselves apart from others.

What is a Skill Test Question

If you’ve never heard of a skill test question, Sandra Grauschopf wrote an article for thebalanceeveryday.com that explains this concept in further detail. It says, “If you enter sweepstakes for Canadians, you’ll often find a strange math equation on the entry form. You may notice a line in the rules that says something like: “If a Canadian resident wins a prize, that person must also answer correctly within a 5 minute time period a mathematical skill-testing question without the benefit of any calculating devices, before the prize will be awarded.” These questions require basic skill but aren’t complicated enough to make most people lose out on their winnings. Four part mathematical equations are considered appropriate. For example, an equation such as ‘245 plus 38 minus 99 divided by 2’ could be used to test winners.

Why is this a Requirement?

Why must there be a skill test requirement? The short answer: because it’s the law. Grauschopf further explains by saying, “Lotteries have three major components: the prizes have value, the sponsor benefits from the sweepstakes financially, and the winner is chosen at random. In order to avoid being an illegal private lottery, at least one of the three components must be removed. In the United States, the sponsor usually removes the financial benefit, also known as consideration, to avoid being classified as an illegal lottery.” It is because of this, that most sweepstakes don’t require you to make a purchase to enter. Additionally, any purchase you make will not improve your chances of winning. This is how the United States stays legally compliant.

Canada stays legally compliant by eliminating a different component. The above mentioned article goes on to say, “Canadian sweepstakes law requires that the third component, winners are chosen by luck, be removed for a giveaway to be legal. A giveaway cannot use pure luck to determine who wins. There must be at least some element of skill involved, according to the Canadian Competition Act. To remove the element of chance, sponsors narrow the field of potential winners by requiring a skill-testing question to enter their contests. Every entrant does not have the same chance to win; only those who at least pass the skill-testing question are eligible to win prizes.” Some have argued that this requirement is discrimination meant to keep Canadians from winning prizes/money. However, this clause is written into the country’s law and they keep the questions fairly simple. Canada simply wishes their sweepstakes winners to earn their money by using their brain power.

By requiring a skill test question, Canada has set themselves apart from other countries. They are committed to upholding their laws and ensuring each of their winners earns their prizes.